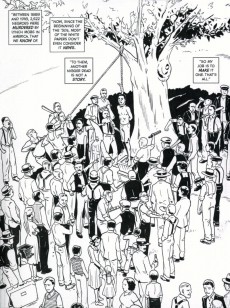 Writer Mat Johnson (HELLBLAZER: PAPA MIDNITE), winner of the prestigious Hurston-Wright Legacy Award for fiction, constructs a fearless graphic novel that is both a page-turning mystery and a disturbing exploration of race and self-image in America, masterfully illustrated with rich period detail by Wareen Pleece (THE INVISIBLES, HELLBLAZER). In the early 20th Century, when lynchings were commonplace throughout the American South, a few courageous reporters from the North risked their lives to expose these atrocities. They were African-American men who, due to their light skin color, could "pass" among the white folks. They called this dangerous assignment going "incognegro."Zane Pinchback, a reporter for the New York-based New Holland Herald barely escapes with his life after his latest "incognegro" story goes bad. But when he returns to the sanctuary of Harlem, he's sent to investigate the arrest of his own brother, charged with the brutal murder of a white woman in Mississippi. With a lynch mob already swarming, Zane must stay "incognegro" long enough to uncover the truth behind the murder in order to save his brother — and himself. He finds that the answers are buried beneath layers of shifting identities, forbidden passions and secrets that run far deeper than skin color.