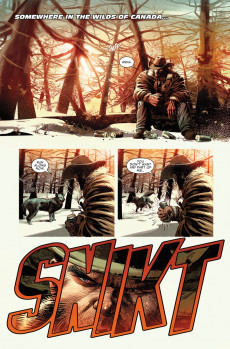 Somewhere in the wilds of Canada, Logan is attacked by a group of aliens infected with the Ultron Virus, who are looking for the Space Stone in his possession to give to their master. Logan easily kills them all with the help of the stone's power, which lets him teleport. Suddenly, Loki appears in front of him and tries to convince him to leave the burden of the stone to him. Logan doesn't trust the Trickster God, so, after stabbing him in the face, he teleports away saying he's going to use the Gem for the mutants' sake and that should the wielders of the others show up, he'll grab theirs, too. Loki is left complaining alone about Logan's carelessness for the fate of their reality, which he believes to be in great peril because of the Stones' resurfacing.

The second stone, is possessed by Turk Barrett, a thug from Manhattan. He enters a casino and showcases his new powers of mind-reading by correctly predicting how a hand would turn out.

Meanwhile, the Reality Stone was obtained by Captain Marvel in Earth-Zeta, and the same happened for other Reality Stones by other Captains Marvel in other realities not their own.

The Power Stone is now so large it cannot even be moved. It resides on the planet Xitaung and was found by Star-Lord and Richard Rider during a mission for the Nova Corps. Right now, as the Novas could not keep their find secret, the Fraternity of Raptors and the Chitauri are waging war against them to obtain the Stone for themselves. The Guardians of the Galaxy are in the eye of the storm, with Gamora intending to go find the Soul Stone, where a part of her soul is trapped in, with Star-Lord more cautious and undecided on which way to go.

The Time Stone is on the planet Sakaar, and is found by the Super-Skrull, who intends to use it and the others to erase the "humiliation of the Skrull Empire from the cosmos."

In Egypt, Adam Warlock awakens from his slumber induced by Rama-Tut millennia ago. He is told he is in 2018, thus it is time for him to continue with his mission.

Finally, another piece of the puzzle is obviously Thanos, who has recently conquered Chitauri Prime with relative ease.

Back in the Milky Way upon Ego, all this is being explained to Magus by the Contemplator, forced by Adam Warlock's doppelganger to reveal the locations of the Stones for him to gather them all. When finished, the Contemplator explains he has made sure Magus would be noticed by other contenders for the Stones and, as he says that, Ultron opens a hole in Magus's chest, killing him. Ultron kills the Contemplator as well, as he says he won't reveal to him the location of the others; meanwhile, inside Ultron's newly acquired Soul Gem is Hank Pym, who looks on in despair at the works of his "son." Beside him, an old Gamora, the part of her soul that Gamora is looking for, explains to him they are trapped there forever.