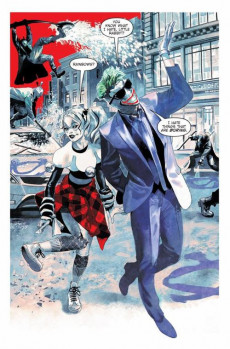 Harleen is a tough, outspoken, rebellious kid who lives in a ramshackle apartment above a karaoke cabaret owned by a drag queen named MAMA. Ever since Harleen's parents split, MAMA has been her only family. When the cabaret becomes the next victim in the wave of gentrification that's taking over the neighborhood, Harleen gets mad.

When Harleen decides to turn her anger into action, she is faced with two choices: join Ivy, who's campaigning to make the neighborhood a better place to live, or join The Joker, who plans to take down Gotham one corporation at a time.