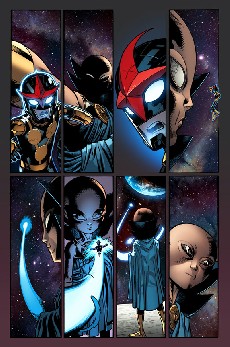 You’ve followed him through the history making (and changing!) AvX and now the mystery of the all-new Nova are revealed in this breathtaking new ongoing by the best-selling, award winning team of Jeph Loeb and Ed McGuinness (RED HULK, Avengers X-Sanction).

Sam Alexander is a kid bound by the gravity of a small town and a father whose ridiculous, drunken fairy tales about a “Nova Corps” were just another heavy burden in a life full of them. But luckily for Sam Alexander…soon gravity won’t even matter. And those troubles? It’s like they’re a billion miles away.