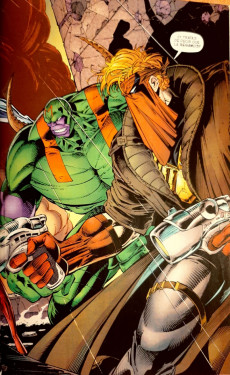 Kid Flash runs in the countryside and is tripped by Epoch, the Lord of Time who attempts to kill him in a hail of bullets that are intercepted by his adult self, traveling back in time with the Justice League of America. The League and Lord fight across time with the heroes using his Chrono-Cube to chase him. The advanced technology of his suit ensures that he can keep shifting across time and that anyone who approaches him slows to a crawl before being able to reach him. In 65,000,000 B. C., Epoch encounters a soliton that enhances his suit even further and allows him to steal the power source of the Chrono-Cube before pushing the League to A. D. 33 where the League discovers it buried in limestone and briefly bump into Marcus Aelius.