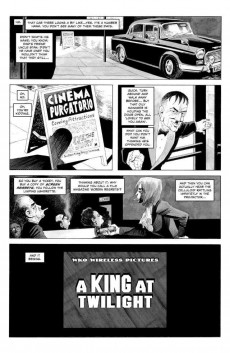 Alan Moore and Kevin O'Neill invite you, and some of the finest creators in comics, in to join them in a different kind of dark: Cinema Purgatorio! This ongoing monthly series will feature Alan and Kevin in every issue and is their first major new project together since League of Extraordinary Gentlemen! Anthology has become a dirty word, so far be it from us to clean it up. Instead we'll shine our light onto the cutting edge of sequential art, with black and white artwork to allow illustrator's pure visions, and the greatest assembly of writing talent ever gathered on one series. Every issue is perfect-bound, with no ads, and all of the works are very long-form, there are no collections planned before 2018. Jump in now and embrace the new future of comics. The one of which Alan Moore has always dreamed. It's here, now. Hiding in the dark corner. Welcome to Cinema Purgatorio.
Now playing:
Cinema Purgatorio - Alan Moore and Kevin O'Neill take a trip through the dark recesses of cinema, the people behind it, the damage it has done, and the story of one woman forced to bare her soul, one short film at a time. Every issue and every story is radically different yet all weaved into one tapestry of breathtaking complexity as only Alan Moore could do.
A More Perfect Union - Max Brooks and Michael DiPascale bring Max's heavily-researched and period authentic story of the Civil War to life. But this time, the South has been invaded by Giant Insects.
Code Pru - Garth Ennis and Raulo Caceres continue the night shift FDNY paramedic Pru as she learns about the beasties in NY City underworld and how to offer them medical assistance!
Modded - Kieron Gillen and Ignacio Calero serve up a future where monsters are pitted against each other, with a goal of catching them all?
The Vast - Christos Gage and Gabriel Andrade bring a new kind of giant monster story to life!