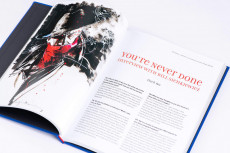 Bill Sienkiewicz (pronounced sin-KEV-itch) is an Eisner-winning, Emmy-nominated artist best known for revolutionizing the way comic books are drawn and made. His work has graced the National Museum of Fine Arts in Rio de Janeiro, Brazil; art galleries in Paris, Barcelona, and Tuscany; and advertising campaigns for Nike, MTV, Nissan, the 2006 Winter Olympics, and dozens of Hollywood movies.

Sienkiewicz is a classically trained painter whose artworks incorporate abstract and expressionist influences and combine oil painting, acrylics, watercolor, mixed media, collage, and mimeograph. Bill Sienkiewicz: Revolution is the first time the artist’s work and career have been taken out of the limited context of comic books and evaluated as fine art. Ben Davis, award-winning Senior Writer for Artnet News, considers Sienkiewicz’s process and places him within the context of art and popular culture. The images for the book are curated by Sal Abbinanti, Sienkiewicz’s representative and colleague for nearly twenty years. Lastly, Bill Sienkiewicz, in an interview with Six Foot Press’s Publisher, Chul R. Kim, lends his unique voice and presents some of his greatest artistic achievements.

BS:R is the first of three volumes in three years, with each volume consisting of a trade and a limited edition.