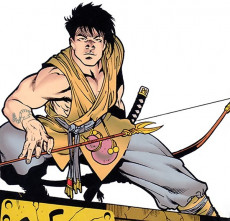 Context
King Tiger was one of the lead characters when Dark Horse Comics launched its imprint World’s Greatest Comics, in 1993. This was a new super-heroes setting. This line almost ended when the comic books market crashed, not too long later.

King Tiger continued to make appearances in surviving books (namely Ghost). Much later, new mini-series were released (under the rescoped brand Dark Horse Heroes), including several with King Tiger. Howbeit, that came much later than this profile, which only covers the 1990s material.