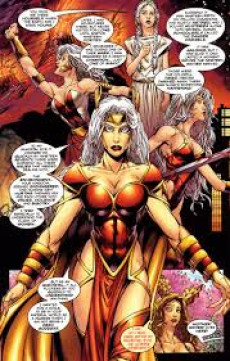 As he did on other Liefeld works like Supreme and Youngblood, Alan Moore relaunched Glory in March 1999 under the Awesome Comics line. Blending mythology, adventure, and romance to the superheroine much as he would shortly do in his subsequent series for ABC Comics, Promethea.

In the retooling, Glory takes on a human identity by a waitress named "Gloria West", in order to experience humanity. Only one issue was published (#0), but it was eventually republished with two additional issues for Avatar Press in 2001. This version also had an extended backstory, once supervising a team called 'Danger Damsels' decades ago.