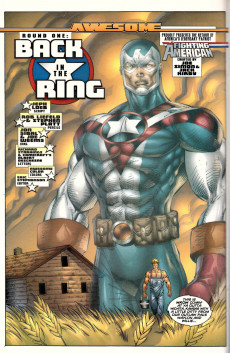 Fighting American was originally created in the 1950s by the team of Joe Simon and Jack Kirby as a humorous send-up of their more famous star-spangled creation, Captain America. In the original series, John Flagg and his crew battled such Cold War baddies as “Hotsy Trotsky” and “Poison Ivan.”

In 1997, Fighting American fell into the hands of Rob Liefeld, who had departed early from his engagement as artist on Captain America (Vol. 2), and was left with a stack of unused pages depicting a shield-slinging do-gooder. When Marvel threatened legal action over Liefeld’s “creation” Agent America, he licensed Fighting American from Joe Simon and relaunched the forgotten title. Fans of Liefeld’s big artwork and unsubtle approach to storytelling (or anyone who was sorry to see him leave Captain America) will get what they came for.