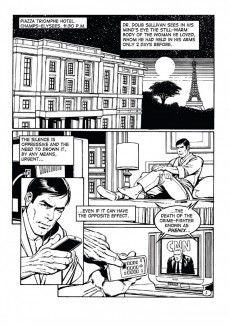 When she was in college, Patricia Hope, the daughter of a billionaire couple, was raped by an assailant still unknown today. She slipped into a deep coma that lasted nine months, and emerged like a phenix from its ashes miraculously transformed, with a body and mind optimized to superhuman levels.

After that traumatic event, Patricia began leading a double life: being a leading Chicago socialite by day, and the black-clad, bike-riding crime fighter known as Phenix by night. She began helping Father Brown's local church and free clinic and date young Dr. Bobby Carter. After her parents' death in a plane accident, Patricia inherited a vast fortune and became the head of the Hope charitable foundation. She later broke up with Dr. Carter when the latter moved to L.A.