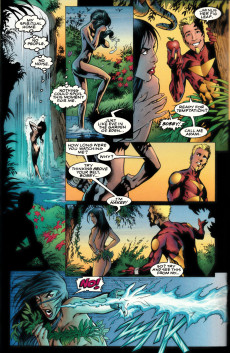 In this series, creators who don’t usually work on the popular Gen13 series, such as Terry Moore, Adam Warren and others, have a chance to craft original stories, and sometimes even new costumes, for the popular super-heroes Rainmaker, Freefall, Fairchild, Grunge, and Burnout. Though the relationships between the characters remains true, the creators’ unique style inevitably surfaces. In Mark Farmer and Alan Davis’ “Lindquist’s Fault” for instance, Rainmaker sports a remarkable costume made of twigs and leaves and team members are suddenly faced with their worst fears, brought on by other-dimensional telepaths which need to feed off emotional extremes.