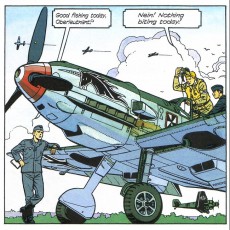 Biggles Recounts is a new French series, which is different from its predecessor Biggles series, by the way that except the title, the storyline doesn’t always revolve around the main character Biggles. The series is more like a self account of Biggles, during the real historical events which has happened through the World Wars which shaped the world as we see it today. Since the Biggles character is fictional, the writers have the flexibility of basing him in every historical incidents, thus it is narrated as if Biggles had experienced the events from a first person point view.

So, if you had been expecting Biggles adventurous series, then you have to take a reality check, before browsing through these historical archives, delivered in graphical format. Since the impact of W.E.Johns and Francis Bergese to the Biggles are already discussed in detail in our earlier post, we will look at the storyline and new artist/writer duo for this two set series.

The Falklands War is set in 1982, in the backdrop of the decade long conflict between Britain and Argentina, over the ownership of Falkland Islands. Deciding to make a head start over the 500 years of futile claims and negotiations, Argentina forcefully occupies the Islands. A British task force is deputed it reclaim the island, which brews into a full blown war between the cross continent countries, with Argentine garrison finally accepting its defeat. The war actually paved way for a testing ground for the modern weaponry of electronic warfare's, where Britain stamped its authority to the world. Surprising even though the title says it is Biggles, the character itself doesn’t make any appearance in 48 page comic book, which takes the sheen out of this historical issue.

This was originally released in French titled Biggles raconte la bataille des Malouines in 2003. This was a new series consisting of a team of brand new writer and artists, in the form of Bernard Asso et Joel Rideau donning the role of Writers, while the artwork was taken care by the duo of Daniel Chauvin et Marcel Uderzo (who is the older brother of Asterix creator Albert Uderzo). None of these creators were known uniquely for their other work, so it says best about their attempt to create a pot-luck out of the Biggles brand. I should say that even though the historical accounting is real good concept, I cannot help but noticing the fact that it was little over-used for a graphic novel format.

The second album on Biggles Recounts, is the Battle of Britain, where the story unfolds in the Spring of 1940. The Third Reich forces streamed into the north-west of France, after pushing through Sedan. France crumbled within 35 days. The Germans pressed their advantage and trapped the British Expeditionary Corps in a corner. English army managed to escape back to England. And the fate of the world was rested on the shoulders of a handful of men, the Pilots of RAF, where our fictional hero Biggles is placed in service. The story then unfolds his team’s adventures through these war torn times, which also interlinks with the real event about the Bombing of Germany in 1943-45.

This was originally released in French titled Biggles raconte la bataille d'Angleterre in 2003. The story was again scripted by Bernard Asso, along with real historical events for which the Biggles Recount series is aimed at. Surprisingly Francis Bergese, stepped into add his charm to the series which he revolutionized in 90’s. I should say that his art has breathed new life into the series, which at times over-weighed by the predominant historical events.