Wolverine - Flies to a spider 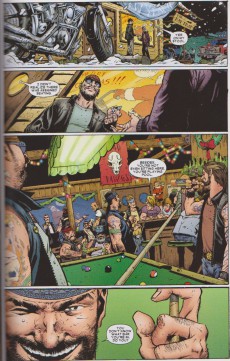 Collecting four tales of all-out Wolverine action! First, meet the Road Dawgs. The meanest, nastiest, most jacked-up biker gang you ever could meet. But tonight there's a stranger sitting on the stool at the end of the bar. Someone who's come here to pick a fight. Someone who's hunting far bigger game than these roughnecks, and knows exactly how to get its attention. Before the stroke of midnight, he'll get his wish. It's Wolverine at his fiercest! Then, you've heard the story before: A beautiful woman picks up a guy in a bar. They have a couple drinks, show each other a good time. And when he wakes up the next morning, the guy finds himself in a bathtub full of ice, with two fewer kidneys than he had the night before. Well, Wolverine's heard this story, too, and he ain't too thrilled by it. In fact, he's willing to bring an end to it in the most direct way he can think of! Also, all Logan wanted was a little drive in the fresh mountain air. What he got was the stench of death on a little patch of road outside the town of Pottsville. Collecting Wolverine: Chop Shop, Wolverine: Switchback, Wolverine Holiday Special: Flies To A Spider, and Wolverine Dead Man's Hand.