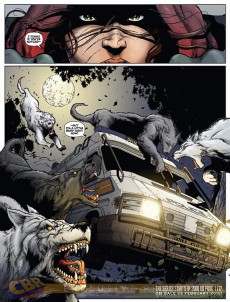 Age of the Wolf is a post-apocalyptic adventure series published in the British comics anthology 2000 AD. It was created by Alec Worley and John Davis-Hunt and first appeared in #1700 in 2010.
In the series the ancient Norse prophecy of Ragnarök brings about a moonlit cataclysm in which most of humanity become werewolves. The plot charts the life of one of the few surviving humans, a dog pound worker called Rowan Morrigan who becomes a deadly werewolf hunter.
The series is a trilogy. The second and third entries shift the story forward years at a time. In the final part 35 years have passed since the beginning and Rowan is a mother in her mid-fifties.
Source: Wikipedia.