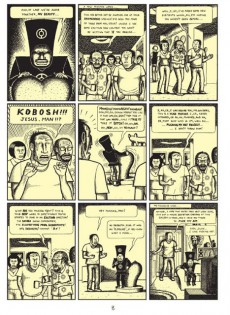 Daly's earlier work has been described as "Tintin meets the Freak Brothers in the Cape of Good Dope." Indeed, Daly's cartoons, offbeat, hallucinatory, and often hilarious, seems descended fromand in some cases an amalgamation ofthe substance-induced work of Robert Crumb, Gilbert Shelton, Victor Moscoso, and S. Clay Wilson, filtered through the artist's own unique vision and sense of the absurd.


Daly's approach swings from introverted dreamlike stream-of-consciousness to over-the-top postmodern vaudevillian. "Prebaby," the centerpiece of this collection, delves into creation, survival, random occurrences and the micro/macrocosm. Told entirely without dialogue, it's almost musical in its execution. It unfolds like the storyboard to a wonky existential animated cartoon, and it's no surprise that Daly studied animation for two years at Cape Town's City Varsity College. In contrast, Daly's "Kobosh and Steve" stories come across as a series of routines by a demented Abbott and Costello. Kobosh even visits a down-on-his-luck Bruce Springsteen in one story, while another strip features a pair of micro-fauna questioning their existence as they feed off the rock legend's scalp.