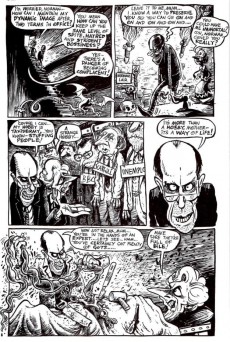 Created by British legends Pat Mills and Hunt Emerson this strident, polemical satire puts the boot in on the appalling tactics and philosophies of the third term Thatcher government with savagely hilarious art and stunningly biting writing.

The concept is simple now but groundbreaking in 1987. The reader is to be Prime Minister Maggie who, by reading sections of the book and selecting a choice of action at the end of each chapter is directed to another page to experience the ramifications of that decision. The objective is to win another election, and the method is to make only vote-winning decisions – thus the multiple-choice page-endings. The intention is not to win the game, obviously.

This powerful piece of graphic propaganda may have dated on some levels but the home-truths are still as pertinent. Even as Maggie and her demented pack of lap-dogs wriggled and squirmed on Mills and Emerson’s pen-points, their legacy of personal gain was supplanting both personal and communal responsibility to become the new norm. Today’s Britain is their fault and this book still reminds us of a struggle too few joined and a fight we should have won, but didn’t.