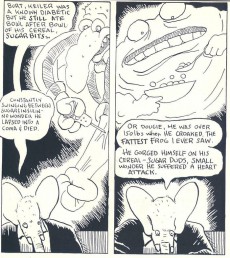 James Sturm’s Cereal Killings is a weird and intriguing series that explores what would happen if cereal-box animal characters were real—and someone was killing them!

Although Tony the Tiger (“They’re Grrrreat!”) doesn’t appear here, the cast is full of familiar-looking cartoon mascots who once lived it up pushing sugary breakfast food; but who are now washed-up actors looking for work. In the midst of it all, a veteran cereal ad man named Carbunkle is trying to pitch his latest project—one involving a mysterious (and missing!) scarecrow that used to be shown fending off birds who wanted to steal his corn in old TV commercials. Will this new cereal campaign turn the industry around? Or will the great cartoon mascots slowly fade into oblivion—or be picked off one by one by the cereal killer?