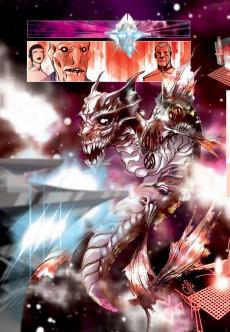 Manifest Eternity is a limited series created by Scott Lobdell and Dustin Nguyen. The story sets in the far future which an Earth-based empire had conquered and annexed the entire known universe. However, a magic-based empire from another realm saw their neighboring reality as a threat to their existence and declared an intergalatcic war between the two civilizations.