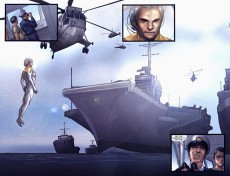 The Authority, Earth's last of defense, have performed God-like acts in their defense of the planet, whether defeating ancient gods or fending off interdimensional invasion forces. But these brave acts haven't always endeared them to many in power...particularly in the United States. The President, tired of being embarrassed by what he views as a bunch of costumed freaks, sets a plan in motion that could very well destroy the Authority from the inside...a plan so cunning and unexpected, it'll shake the Authority to their very core. And with an unexpected threat from the future on Earth's doorstep, if could very well mean global extinction!