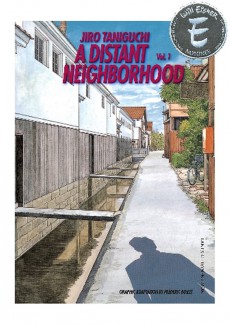 Who hasn't dreamt of going back to childhood? But who has actually made the journey? Hiroshi Nakahara is a forty-something salaryman returning to Tokyo from an intense business trip. He is tired and somewhat hungover as he boards his train at Kyoto's enormous station. He awakens to discover he is traveling back to the town of his upbringing, not Tokyo. Memories of his mother surface and he realizes he has the same age as her when she died. Arriving in Kurayoshi he is drawn through his distant neighborhood to the cemetery and his mother's grave. Here, under a late afternoon moon, he is transported back into his 14 year-old body and life whilst retaining all the character and experience of the adult. Will he change his past or be forever condemned to relive each painful moment? That fateful day his father disappeared without explanation, the death of his mother ... would he ever see his wife and daughters again? Master manga-ka Taniguchi at his most powerful with the art individually reversed to western style by craftsman Frederic Boilet.