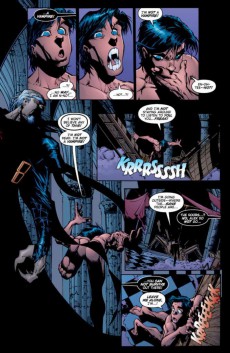 Crimson revolves around a young man named Alex Elder who is attacked by a gang of vampires while out late with his friends. Bitten, Alex is saved by Ekimus, the last of an ancient race pre-dating humanity, who claims Alex is "The Chosen One." Alex becomes the first and last of his kind, gaining powers beyond that of a normal vampire, who is destined to bring the end to vampirekind. The series follows Alex as he adjusts to life as a vampire and shoulders the responsibilities of being chosen. The comic features not only vampires, but werewolves and other supernatural beings and elements, as well as Biblical themes and deities.