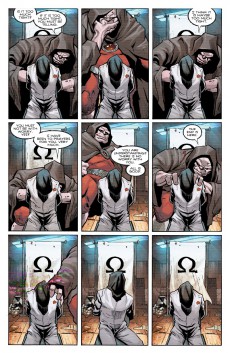 Kyle Rayner, the White Lantern, is dead. And the Omega Men killed him. On live TV. They’re a criminal gang, a terrorist organization, a fanatical cult. And they’re the only hope for freedom this godforsaken sector of the universe has. No matter what the citizens of the Vega System think they saw, the White Lantern lives…as the Omega Men’s prisoner. What they really want him to be is their latest recruit in their relentless war against the all-powerful Citadel and its tyrannical Viceroy. As Kyle gets to know this motley crew of outlaws, he’ll question everything he knows about being a hero. In this strange system where the Green Lanterns are forbidden, will he break his oath and join their revolution? Or will he discover that the Omega Men are monsters in the end?