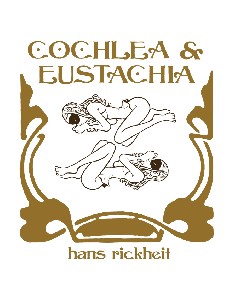 Cochlea & Eustachia appear to be twin human girls, but this has yet to be confirmed. Their actions seem to be motivated less by curiosity than boredom and an inclination towards purposeless destruction. Any connate objective remains to be determined. They never stray apart from each other, out of an unspoken proclivity. Perhaps they keep together because they resemble each other; a mixture of vanity and comfort is the foundation of their constant companionship. They seem to consider any creature with dissimilar features as inept or untrustworthy. They are suspected of giving hypnotic suggestions to cats. They do not seem particularly malicious, just meddlesome. This new graphic novel from the author of the acclaimed Squirrel Machine is lighter in tone than his previous works, yet its myriad charms remain as sinister as Rickheit fans would expect.