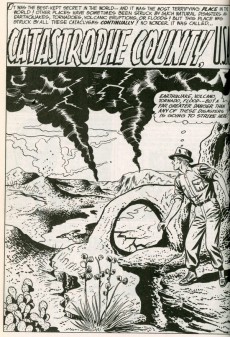 Strange Adventures ran for 244 issues and was DC Comics' first science fiction title. It began with an adaptation of the film Destination Moon. The sales success of the gorilla cover-featured story in Strange Adventures 8 (May 1951) lead DC to produce numerous comic book covers with depictions of gorillas. The series was home to one of the last superheroes of the pre-Silver Age of Comic Books era, Captain Comet, created by writer John Broome and artist Carmine Infantino in issue 9. A combination of the "Captain Comet" feature with the "gorilla craze" was presented in issue 39 (December 1953). Other notable series included Star Hawkins which began in issue 114 (March 1960) and the Atomic Knights which debuted in issue 117 (June 1960).
In 'The Strange Adventure That Really Happened' in issue 140 (May 1962), real life comics creators editor Julius Schwartz and artist Sid Greene struggle to make writer Gardner Fox recall a story he has written that holds the key to saving the Earth from alien invasion. In a rare acknowledgement of the rest of the DC universe in Strange Adventures, one panel mentions Gardner Fox having previously met the Flash in the iconic Silver Age story "Flash of Two Worlds".
Strange Adventures 180 (September 1965) introduced Animal Man in a story by Dave Wood and Carmine Infantino. The character was revived by writer Grant Morrison in 1988.
Initially a science fiction anthology title with some continuing features starring SF protagonists, the series became a supernatural-fantasy title beginning with issue 202, for which it received a new logo. Deadman's first appearance in Strange Adventures 205, written by Arnold Drake and drawn by Carmine Infantino, included the first known depiction of narcotics in a story approved by the Comics Code Authority. The "Deadman" feature served as an early showcase for the artwork of Neal Adams.
With issue 217, the title gained another new logo and began reprinting stories of Adam Strange and the Atomic Knights, among other stories. Several Strange Adventure stories were also reprinted in some of DC Comics' later anthologies, such as From Beyond the Unknown.
In 1978, DC Comics intended to revive Strange Adventures. These plans were put on hold that year due to the DC Implosion, a line-wide scaling back of the company's publishing output. When the project was revived a year later, the title was changed to Time Warp and the series was in the Dollar Comics format.