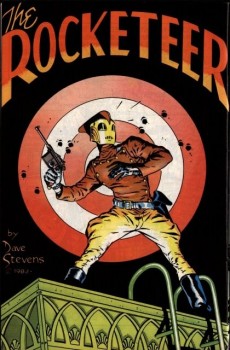 The story takes place in 1938, Cliff Secord is an airline pilot a little daredevil. One day he gets his hands on a human scale prototype rocket dropped by two bandits pursued by the police. He decides to appropriate the machine and after some modifications, he manages to make a jet -pack allowing it to fly.
During an air show , it saves in extremis the life of a driver about to crash and will be subject to all the attention at that time. Thus began the great adventure of The Rocketeer!