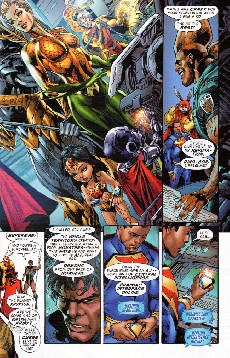 The Multiversity features a new story about the Multiverse being invaded by demonic destroyers known as the Gentry, initiating the "Battle for All Creation".
The series contains 8 one-shot issues, with two of them being bookends. The bookends will function as a two-part story, which Morrison describes as an "80-page giant DC super-spectacular story".[30] With each one-shot taking place in a different universe, each publication will also feature different trade dress and a different storytelling approach,[30] Morrison explains, "each comic looks like it comes from a different parallel world, so they're all slightly different."[24]

Morrison stated that when developing the series, he had to think of a way for the featured universes to communicate with each other. He recalled "The Flash of Two Worlds" story line from The Flash #123, where the adventures of the Golden Age Flash, Jay Garrick of Earth-2, were documented as a comic book on Earth-1. He incorporated this device into The Multiversity, stating "they're reading each other's adventures, so there's some way that if a real big emergency arises, they can communicate using comic books. So each world has a comic from the previous world which has clues to the disaster that's coming their way, and they all have to basically start communicating using writers and artists so it's my big, big statement."[31] Morrison further explained how the device is used to create a cohesive story, "it's almost like a baton race or a relay race where each of the worlds can read a comic book that's published in their world but which tells the adventures of the previous world. The characters are actually reading the series along with the readers."