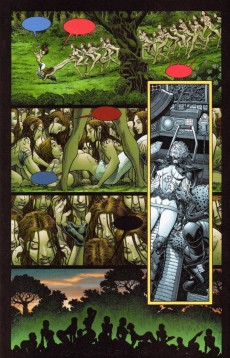 Tom Strong's Terrific Tales is an anthology spin-off from the parent title. It usually features three regular storylines in each issue:

One story would usually focus on Tom Strong, or on one of his supporting cast, and be either experimental or humorous in tone;
Another would be a Young Tom Strong tale (set during Strong's formative years on Attabar Teru, and illustrated by Alan Weiss);
A Jonni Future story (by Steve Moore and Art Adams) would often round out the issue.