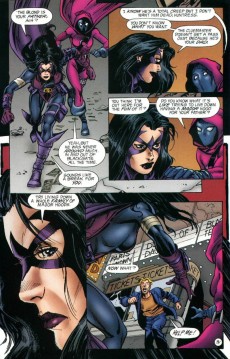 Stephanie Brown along with her boyfriend Dean are at the mall when the earthquake hits decimating Gotham, with Stephanie defying Robin's orders to assist the people who need help as Spoiler. While elsewhere several villains escape Blackgate prison. The escapees then head for the mall in order to gain civilian clothes so they can blend into the chaos of Gotham,as Spoiler combats the looting taking place in the mall. However she's forced to break off to save a little girl, but ends up falling only to be saved by the newly arrived Huntress. However both their attention is drawn by gunfire, stopping the Baffler as the other inmates continue changing.

Cluemaster seeing the Spoiler and recognizing her as Stephanie then orders the escapees to leave, while on the beach the betrayed Chubbs awakens. As they prepare to leave Firefly disappears having went to set fire to the bottom levels of the mall drawing the Huntress's attention. Cluemaster then has everyone begin carrying money out from the Gotham savings and loans as Spoiler and Huntress arrive,forcing Cluemaster to have Monsoon attack the two. After defeating him they try and capture the escaping escapees while dealing with the returned Chubbs out to murder Cluemaster. Stephanie then tries to capture her father who is temporarily saved by the RatCatcher,but lets her father get away for fear of the Huntress murdering him as Stephanie helps the injured Huntress out of the mall.