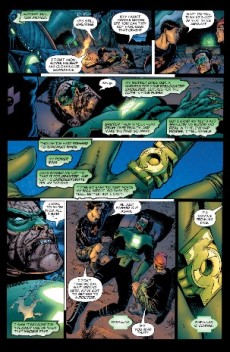 The storyline follows the "rebirth" of the Silver Age Green Lantern Hal Jordan as he overcomes fear itself in the form of the cosmic entity Parallax. The series starred various members of the intergalactic police force known as the Green Lantern Corps, Kyle Rayner, John Stewart and Guy Gardner. It revived elements of the Green Lantern mythos including the Guardians of the Universe, Kilowog and the villain Sinestro, while introducing new concepts such as the emotional spectrum. In addition, the GLC power ring's flaw of being unable to directly affect the color yellow is significantly weakened, allowing experienced Corps members to overcome it if they can conquer their fear.