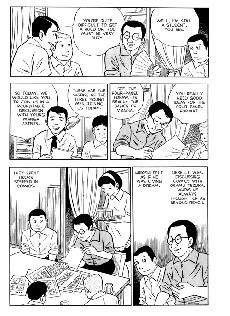 The epic autobiography of a manga master

Acclaimed for his visionary short-story collections The Push Man and Other Stories, Abandon the Old in Tokyo, and Good-Bye—originally created nearly forty years ago, but just as resonant now as ever—the legendary Japanese cartoonist Yoshihiro Tatsumi has come to be recognized in North America as a precursor of today’s graphic novel movement. A Drifting Life is his monumental memoir eleven years in the making, beginning with his experiences as a child in Osaka, growing up as part of a country burdened by the shadows of World War II.

Spanning fifteen years from August 1945 to June 1960, Tatsumi’s stand-in protagonist, Hiroshi, faces his father’s financial burdens and his parents’ failing marriage, his jealous brother’s deteriorating health, and the innumerable pitfalls that await him in the competitive manga market of mid-twentieth-century Japan. He dreams of following in the considerable footsteps of his idol, the manga artist Osamu Tezuka (Astro Boy, Apollo’s Song, Ode to Kirihito, Buddha)—with whom Tatsumi eventually became a peer and, at times, a stylistic rival. As with his short-story collection, A Drifting Life is designed by Adrian Tomine.