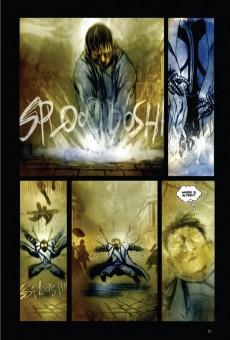 Based on Beddor's The Looking Glass Wars trilogy, this graphic novel series follows the story of Hatter Madigan, expert bladesman, high ranking Millinery man, and Royal Bodyguard of Wonderland as he searches for Princess Alyss. Before Queen Genevieve was beheaded, she ordered Hatter to protect her daughter, but when he takes Alyss through the Pool of Tears, he loses her. Hatter finds himself in 1859 Paris missing both Alyss and his signature hat, a weapon complete with blades. He travels to Budapest on the trail of a "Princess" kidnapped by Baroness Dvonna, who runs an orphanage that drains children of their imaginations. Hatter believes it could be Alyss and sets out to destroy Baroness Dvonna and her "Night Walkers." Hatter's unfamiliarity with human customs keeps him in constant battle mode, fighting many foes who underestimate his prowess - knives and blades shoot out of him either shocking or killing his opponents. Pictures carry much of the weight of this story through well-crafted colorful illustrations depicting the action, violence, and bloodshed that constantly follows Hatter. Readers who have read The Looking Glass Wars will get more out of the story, but the graphic novel could easily stand alone. The end contains FAQs about the existence of Hatter, his weapons, and ephemera found in a trunk proving Lewis Carrol's Alice in Wonderland to be a literary lie. Although the violence makes this title more suitable to an older audience, it is a wonderful companion to the novels and a great addition to library collections where Beddor's novels, fantasy, and graphic novels are popular.