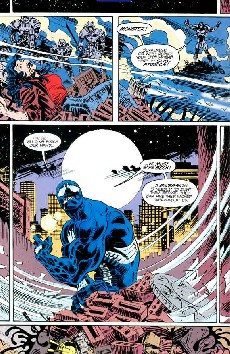 It is shown that while Mace was escaping his power source was dropping in energy which meant he needed to find a safe spot. Coincidentally he found himself among a few desperate men who were being abused by land sharks. They could not protect themselves well enough, and were on the path to asking for help. In desperation they decided to hire a hero to take care of the problem, at that very moment Mace's cloaking device fails and he makes the announcement that he was willing to take the job for food, shelter and a pair of sunglasses which he took from one of the leaders of the group of homeless people.

Although they were not pleased and found Mace to be more of a bounty hunter than a Hero, they decided to hire him and he became quite useful. Even though they did not like his ways, they still couldn't deny he was a huge help, taking down the land sharks and getting them out of the abandoned building. This would eventually be trouble, for unbeknown to Mace, Venom protected those land sharks without realizing they were not as humbled as they looked.

Mace soon got a ride with Beck, Eddie Brock’s girlfriend at the time. Mace shares the information with Beck that the group which he attacked (Protected by Venom) were the ones who terrorized the poor people in the other side of town. Arriving at the drop point Mace gets off Beck’s car without realizing that Venom was waiting for him with open arms. Not very friendly open arms at that.

Beck tries to explain to Venom that Mace is the actual good guy but being a stubborn creature Venom clouds Eddie Brock’s judgment and cuts Beck’s statement short as he interrupts her by filling in a death sentence to Mace. Beck tries and tries and finally manages to get Eddie to remove the symbiote from his head, for it frightens her. A mistake that could have been the death of Brock since Mace was aiming his cannon at the temple of the lethal assassin.