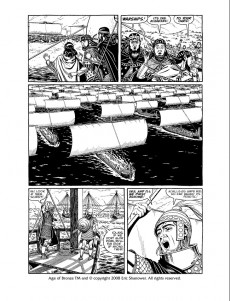 AGE OF BRONZE, the continuing graphic novel series by Eisner Award-winning cartoonist Eric Shanower, presents the complete story of the world-famous War at Troy, freshly retold for the 21st century. All the drama of the ancient and thrilling tradition unfolds before your eyes, with all the familiar people and events of the Trojan War.
Age of Bronze is first serialized in individual issues of the comic book series. The story is then collected into volumes as graphic novels. The first several of seven projected volumes are available now. Volume one is titled A THOUSAND SHIPS, volume two is titled SACRIFICE, and the first part of volume three is titled BETRAYAL.
Primary sources for Age of Bronze's version of the Trojan War story begin with Homer's Iliad,include major and minor works from classical Greece and Rome, many Medieval European sources, and continue through Shakespeare's Troilus and Cressida and beyond. The art of Age of Bronze draws upon the archaeological excavations of the places where the story took place: Mycenae, Knossos, and Pylos, among others, and especially Troy itself.

While everything in Age of Bronze is based on existing sources, whether mythological or archaeological, the final product is a version for the 21st century. All the comedy, all the tragedy, all the wide canvas of human drama of the Trojan War unfolds within the pages of Age of Bronze. Come along for the ride!