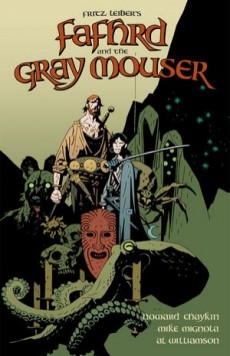 A hulking barbarian from the northern wastes and a lithe, wily southerner team up in the fantasy world of Nehwon, all aglow with skullduggery, sorcery and wine. Their rollicking saga begins with "Ill Met in Lankhmar," when the two rogues first join hands and fates while robbing two members of the Thieves' Guild. Alas, they run afoul of the guild's potent socerer but wreak satisfying vengence. Their swashbuckling exploits run to brawling, boozing, and (off-stage) wenching rather than epic quests, as the plots satirize love, power, materialism, and cheap salvation in a rather sad sous-text. Yet good humor and drollery surround them throughout. Regrettably, the witty adaptation seems overly condensed, and Leiber's original prologs about the two men's pasts are omitted. The lovely art is stylish and fluid, with Art Deco touches and moody coloring. Leiber was a founding father of the sword-and-sorcery genre, and these seven tales from his beloved Fafhrd/Gray Mouser collections were adapted originally in the 1980s.