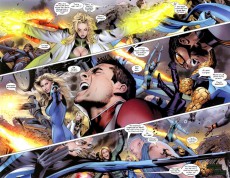 The Fantastic Four's leader, Reed Richards, has accidentally punched a hole into an adjacent universe in a desperate bid to gain the knowledge he needs to cure his friend Ben Grimm - The Thing. But something has come through the aperture from a realm known as the Supremeverse: The Squadron Supreme! They are angry and here to arrest young Reed for high crimes against their world! Collects Ultimate Power 1-9.