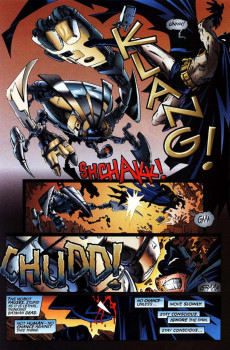 Batman travels to New York City, to investigate a series of brutal murders, who has apparently engaged in cutting the heads off of his victims. The killer, holds high tech weapons and equipment, and wants the brains of the homeless to operate his creations, thus the decapitations. When Batman meets Spawn, they mistake each other for the enemy, and engage in a series of battles, but upon realizing that they are after the same perpetrator, they work together operating on a strained relationship.