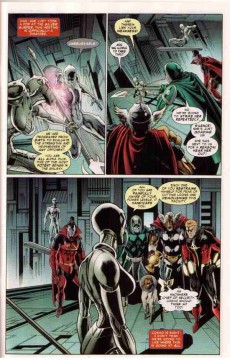 In March 2011, the brightest stars of the Marvel cosmos shine together as writers Dan Abnett and Andy Lanning bring artist Tan Eng Huat into their interstellar orbit for the out-of-this-world four issue limited series ANNIHILATORS.

Following the harrowing events of The Thanos Imperative, the Silver Surfer, Beta-Ray Bill, Quasar, Gladiator and Ronan the Accuser band together to fill the void left by the loss of Nova and the Guardians of the Galaxy. For the duo collectively called DnA, this project represents a chance to check yet another box in building their impressive legacy as pioneers of Marvel’s final frontier.