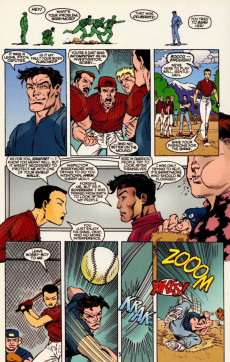 Chris Claremont's first attempt at creating a comic book after his departure from Marvel in the mid-1990s brought together a group of, obviously, seven aliens who had been exiled to Earth. Until the latter issues, the book was not particularly connected with the larger DCU, except perhaps for the several appearances of Darkseid. By the end of the run, however, there had been several crossovers with long-established DC characters. Notably, Claremont eventually allowed for the inclusion of Power Girl on the team for about the last year of the book's life.