It rhymes with Lust 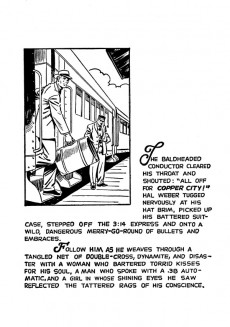 In 1950, writers Arnold Drake and Leslie Waller, both attending college on the G.I. Bill, envisioned a sophisticated, novel-length comic tailored to their peers. Collaborating with comics art master Matt Baker, known for singularly defining the genre of "good girl art" on titles such as Phantom Lady, they crafted a film-noir inspired masterwork of romance, intrigue, and moral relativity. When cynical newspaperman Hal Weber reunites with old flame Rust Masson, he finds the beguiling widow of a mining magnate willing to do anything to undermine the local political machine--her only opponent for total control of Copper City!