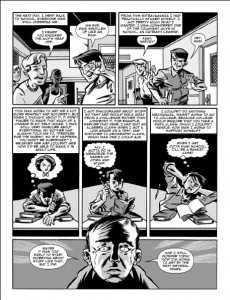 In this virtuoso graphic novel, Harvey Pekar — whose American Book Award-winning series American Splendor was the basis for the celebrated film of the same name — tells the story of his troubled teen years for the first time, when he would beat up any kid who looked at him wrong just to win the praise of his peers. And when he failed to impress, whether on the football team, in math class, in the Navy or on the job, he simply gave up. A true tour-de-force, THE QUITTER is the universal tale of a young man's search for himself through the frustrations, redemptions and complexities of ordinary life.

With gritty, atmospheric artwork by indie-comics luminary Dean Haspiel (American Splendor, Opposable Thumbs), THE QUITTER is both Pekar's funniest and most heart-wrenching work yet, an unforgettable graphic novel for all those, like Pekar, who have tried, failed and lived to quit another day.