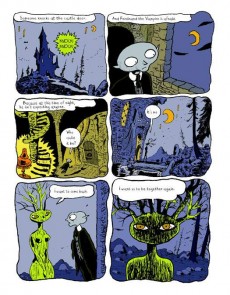 Meet Ferdinand, a vampire who bites his victims with only one tooth in order to pass as a mosquito, who loves the music of dead folk singers, and who has no end of trouble trying to make sense of his relationships, some living, some not.

Vampire Loves follows the strangely romantic adventures of Ferdinand and his friends as they flirt with, seduce, cheat on, break up, and make up with all manner of unearthly creatures including ghosts, other vampires, tree-folk and the occasional golem.

Edgy, charming, and filled with Joann Sfar's inimitable blend of tenderness, comedy, melancholy, and philosophy, the stories in this first volume draw as much from the wellspring of Eastern European Jewish mysticism as from twenty-first-century Goth culture.

Love isn't any easier when you're dead.