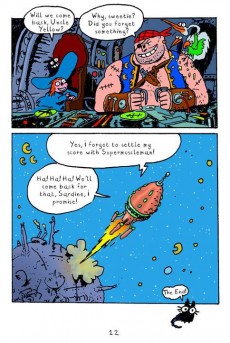 Sword fighting her way through this French paean to disobedience is tiny space-pirate Sardine, all long red hair and giant blue hat, who cruises in her spaceship Huckleberry with Uncle Yellow Shoulder and friend Little Louie. Their mission: to oppose Supermuscleman, the mustachioed tyrant of a space orphanage where children are taught "proper behavior." In 12 whirlwind tales filled with comic battles and clever escapes, the heroes foil the villain's plans, exposing themselves to the dangers of space lions, ice-cream shops, and video games. The disobedience stays largely within reason, and Uncle Yellow appears to have as many rules for his wards as the space orphanage does. But Uncle Yellow is still a big, burly pirate, which makes for a free-wheeling ride peppered with as much grisly monster-filleting action and bodily fluid humor as a young reader could want. Sfar's off-kilter, slightly uglified art, reminiscent of a toned-down Beavis and Butthead, gives the simple fun an unusual punch.