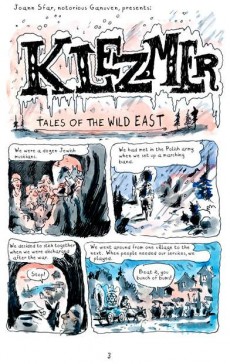 Meet Noah Davidovich, dubbed The Baron of My Backside and his unlikely band of musicians:

...Chava, a young woman who follows The Baron away from her remote village; Yaacov, a favored student whose rabbi has banished him from his yeshiva; Vincenzo, a wandering Italian fiddler; and Tshokola, a gypsy pursued by Cossacks - all unforgettable new characters from the inimitable Joann Sfar.

In a startling, loose watercolor style, Sfar evokes the Jewish communities of pre-World War II Eastern Europe and the itinerant klezmer musicians who performed at celebrations, festivals, and cabarets. Following in the tradition of Isaac Bashevis Singer's short stories and rambling Yiddish folktales, Sfar's colorful characters personify the multifarious influences that have poured into the music of klezmer, and into the Yiddish t

The first book in a series featuring The Baron and his musical fellowship, Klezmer is at once dark and lighthearted, tragic and hilarious, violent and tender - and Sfar himself never ceases to amaze, to surprise, and to defy categorization.